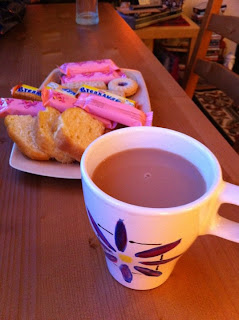 Tonight was MET in Glasgow at Rosie's, and since I hadn't had my tea for the day I opted for a cup of standard (decaffeinated) tea with milk. It was definitely decaf, since I was pretty weary by the time MET was over and my brain not a hundred percent 'there' either in driving or in conversation. But it was good to meet up with other believers and discuss what the Word teaches - tonight we were talking about the sacrifice that Jesus made by dying on the cross, including such topics as: did He suffer the punishment in hell, or just there on the cross? (the fact that He stated 'It is finished!' before He died seems to indicate the latter). What does the word 'reconciliation' mean and why is it important? (We discussed the fact that it is not a brand-new relationship we get with God, but an ageless one from the beginning of time that was broken at the Fall, and restored by Jesus' sacrifice.) Is it 'too easy' to simply believe that we cannot be right with God on our own, but Jesus has done it for us? (The answer being yes, it is 'too easy': for us. Jesus took all the punishment and had all the depths of hard and difficult and pain that we won't have to have when we leave this world. So the hard part was His.) 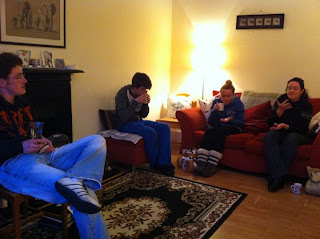 I could go on, but again the decaf tea is failing me here, so I will simply say that it was encouraging to be with other believers and pray with them and return home to fall into bed! I have been walking longer each day lately - just taking the normal, standard route - which is nice for a change. When I did my Walk In All Weathers blog, I was constantly looking for a new walk, a new place, a new view.  Now, since my focus is on different kinds of tea, I can simply get up and go the same route and pass the same people and the same views; I'm kind of enjoying it.  I've been walking at least 45 minutes each morning, and whilst I find myself just that little bit more exhausted by the end of the day, there's a lot to be said for routine.  The best exercise comes from regular, consistent, "I don't feel like it today" efforts that in several months pay off.

But tomorrow morning I have to get up at the crack of dawn to go to Bristol, so I shall leave you!