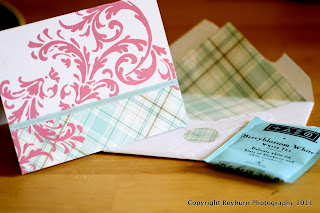 Today I got a beautiful gift in the post from my dear friend Brenda - an actual card (with very pretty stationery and a matching envelope) and a new kind of tea along with it! Everything was so pretty - the card matched the envelope which matched the tea which matched the pen that was used to write with. This tea blogging is just blessing me all over the place! Getting an actual handwritten card through the post is encouraging in and of itself, in this day of emails and text messages and Facebook, but getting a new kind of tea I've never tried before (and thereby making the day's decision very simple) is the best gift I could ask for. 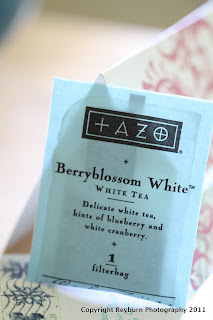 So, today's tea is Tazo's Berryblossom White. I'm a big fan of white tea - it's so different from every other kind. Green tea has a deepness and a bitterness to it; regular tea is dark and powerful; herbal teas are still fairly heavy in their fruitiness...but white tea is one of the lightest teas there is. "Delicate white tea", the packet says. "Like a flower petal brushed against your cheek". Boy, these guys sure can write. (Guys? As if!!) For someone who after 22 days of writing about tea is beginning to struggle to find new words for the term 'flavour', I appreciate the help these tea-packet-writers have done for me.

White tea is so light that you have to think hard to taste the flavours they insist that they've added. It's as though the blueberry and white cranberry simply gave the idea of their presence - perhaps one blueberry for the whole batch of tea, rather than several cups of berries. In her card to me Brenda said, "I've had this 'Berryblossom White' before, but never took the time to truly taste it. I do so now. I have to cheat to know what the flavours are...but since it says on the packet, I know there's blueberry!" I'm with Brenda. 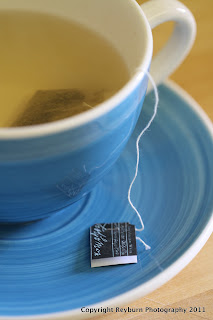 I'm also thrilled that she has taken the time to really taste the tea - or to make a good effort to do so! White is a challenging one to genuinely taste, and it takes a good amount of steeping, as well. There's a late bitterness that appears several minutes in which is not there early on. When I drink white tea from a teapot, I like to pour myself a cup and drink that as quickly as possible when it is pale and new and at its lightest. The next cup will be darker, and the next darker still...until the last cup tastes like an entirely different kind of tea than the first.

My walk today was fairly run of the mill. Just another scene in my montage. The last few days I haven't really felt like going out, but I love the feeling I get when I'm done. And what kind of a montage is it if I give up a week or two in? The montage may last a minute or two on screen, but it represents months and even years of hard labour. That's where I'm at today. 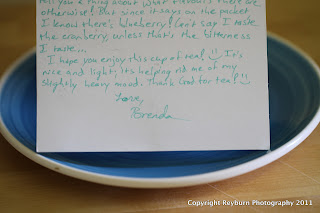 My favourite statement of the whole card is the ending sentence, "Thank God for tea!" I couldn't agree more.