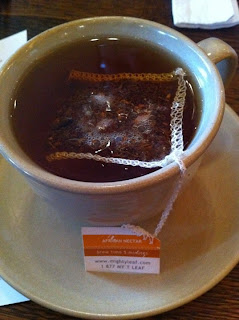 Tonight I went to Nando's for dinner, and discovered that they not only serve tea, but more importantly 'tea infusions' - the closest thing you can get to loose leaf tea whilst still using a teabag.  "Silken pouches of fruit, herbs, spices, and whole tea leaves", as the menu proclaims.  I decided to go for African Nectar, which didn't have a description but I think after 87 days of tea I'm pretty capable of guessing the basic ingredients, at least.

It's a reddish-gold tea, and with the name African definitely suggests rooibos, with its distinctive red colouring.  The word 'nectar' hinted at golden honey, and inhaling the smell definitely lent credence to that theory.  After a sip or two I was confirmed in those two flavours, but there was something else too.  Something almost citrusy - I'd think maybe orange or lemon, although something more exotic wouldn't be a surprise.  And once I'd drunk the tea, I actually dissected the tea bag to see if there were any further hints.  It almost seemed like there was something like cloves, although that could just be larger pieces of the rooibos bark, and perhaps lightly coloured rose petals?  Or some other very light, fragile flower.  If that's not what's in the tea, it would definitely make for a good choice, in my opinion! 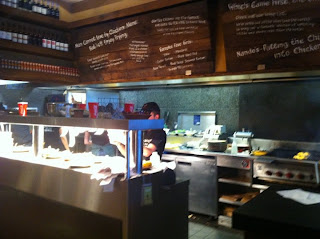 The tea was lovely.  The various secondary flavours supplemented the rooibos well, and it was light enough to drink as much as you want, whilst flavourful enough to let the tea steep for longer, if desired.  Now that I've analysed it myself, I went to the Mighty Leaf site and looked up the African Nectar variety, to see how close I was.  It turns out I was very close indeed.  It's definitely a rooibos, and other than 'natural flavours' which weren't further described, there are organic hibiscus and marigold flowers.  That's the petals I saw.  Very light indeed.

I'm pretty proud of myself for discerning the tastes so well.  I'm really beginning to enjoy this tea journey!  There are only three days left, which is hard to believe.  It's been a long one, but a good one, and has spanned several countries and will definitely be missed.  And all the lessons I've learned will be valuable any time I drink tea in the future!  But there are still a few days left, so I look forward to the final steps in the journey.