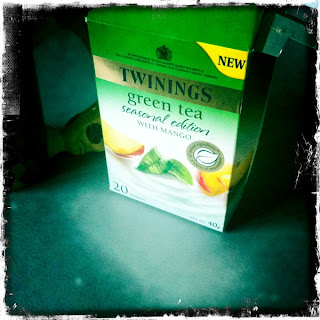 Another of the green tea versions. This one, as you can see from the picture, is a 'seasonal' version of Twinings green tea. I love these, because it expands my tea enjoyment in new and different ways all year!

I think this version is one of my favourites, but I can see why it's seasonal. It conjures up summer afternoons, salads, tropical islands, and even those drinks with little umbrellas in them. The mango cuts the green tea bitterness just perfectly, and I've been known to drink four or five cups of this a day, particularly if it's cold and I'm tired. (I've mentioned previously that green tea, contrary to my initial thoughts, definitely has caffeine in it!)

Today was an interesting opportunity. I found £15 in cash lying on the ground.  The strange thing was, it was close enough to someone's house for me to feel that it probably belonged to someone in that house, and yet just far enough away to be a little unsure. It was right next to the driveway, in the kind of place where if you pulled the car out, then opened the door to do anything (shift the rubbish bin, shut the gate, etc), it would have fallen out. I asked the neighbour lady if she had dropped it, as she was just walking into her house, but she said no. I chapped the house door, but no one answered. I actually went for my whole walk with the money in my hand, but on my way back I decided to just drop it through the letter-box of the house it was closest to.  £15 is enough to miss, but not enough to be broken-hearted over losing (although I suppose it depends how old you are or what your salary or allowance is!).  And while standing there momentarily undecided, a verse from the Bible came to my mind. There's a story about a man called Jacob whose brother wanted to kill him, and Jacob ran away and worked for his uncle. When Jacob returns to his family twenty years later, his brother comes out to meet him, and although Jacob is fearful, his brother meets him with an embrace and kind words.  Jacob offers him a gift, and his brother Esau initially refuses it.  Jacob insists, with these words: "Please, take my blessing that is brought to you, because God has dealt graciously with me, and because I have all".  (Genesis 33.11)  I have always loved that verse. 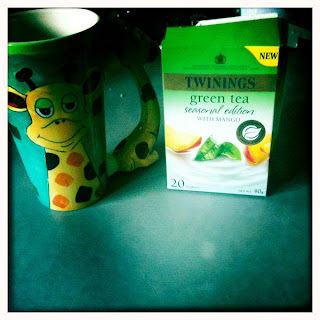 It reminds me of those two beautiful truths, that God deals graciously, and in terms of what I need, 'I have all'.  So, I don't know if that £15 belonged to the nice people in the house I passed, or whether someone dropped it on the path as they walked by, or where it came from.  But God has dealt graciously with me, and I have all, and so I dropped it through the letterbox. Wouldn't it be funny if someone reading this suddenly realised it was them, it was their house that got the mysterious money?

Enjoy your walk, and God's graciousness, and the 'all' that He provides.