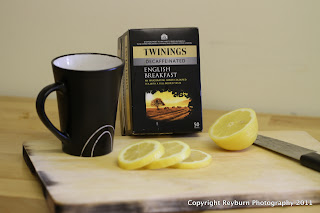 (Note: this blog post was written thinking it was an Earl Grey, when it was English Breakfast!)

I thought for a moment that I had done Earl Grey tea already, and it turns out that I have, but the loose leaf, full strength version.  Today I found a box of Decaffeinated Earl Grey, and got on with boiling the kettle, anticipating my cup of tea-with-milk.  Opened the fridge to find there IS no milk there. Hmmm, what to do, what to do.

Found a little thing of lemon juice and thought I'd heard of having earl grey with lemon, so I squeezed some in. 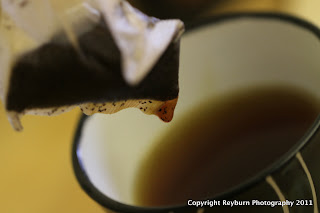 It is really, really nice. Highly recommended. I'm not sure where the tradition came from to have lemon in earl grey tea (probably in the war when there wasn't enough milk to go around), but it's lovely. As with most fruit and citrus aspects, as you've been no doubt noticing as we go along on this tea journey, it serves as a foil to the natural bitterness of the tea.  In literature, someone who acts as a foil is one who contrasts so much with another character (usually the chief character, or the 'protagonist'), that they bring out some of the key highlights of their personality. Well, I think lemon does that very well in this decaffeinated earl grey tea. It highlights the dark nature of the tea, it brings out even a little sweetness there which you wouldn't notice otherwise. It prevents a nasty aftertaste and lightens the whole sense of the tea, so that instead of drinking maybe half a cup and being done, I drink it right down to the bottom of the cup and possibly even want some more. 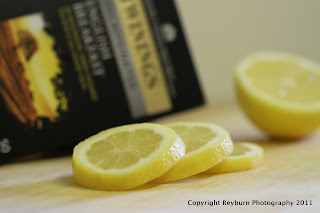 In fact that's just what I'll do. My sister is out buying milk so I've asked her to buy a lemon and I'm going to have it with proper lemon slices. As you do.

So now I'm trying it with proper lemon...wow. That's some zest. It's got a tang to it that Earl Grey has never had in my memory before!

This morning I went out to distribute leaflets with others from my church. It was wet, cold, and grey. A perfect day to drink Earl Grey....and I drink the lemon in it as a mark of hope that there may yet be a slice of sunshine to go with this dark, damp, wet day.