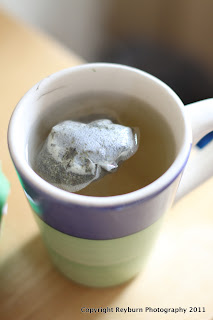 Initially I had plans of an earl grey today, but after a lovely walk I changed my mind. It felt like a 'green tea with lemon' day. Actually, I'm quite addicted to 'green tea with...' over the past six months or so. Green tea on its own is a little harsh, slightly bitter, with a fiercer aftertaste...but green tea with lemon, or mango, or orange, or anything fruity gives it that cleaner, fresher taste with no bitterness.

So today's weather matched a Green Tea With Lemon choice. The skies were grey, so I thought it would be cold and chilly, but I was almost warm, and I didn't even have a coat. Slightly deceiving, really. There were blue skies on their way, and sections of sunlight that flashed through, warming me up even more. The air was mild, and the breeze was fresh with a wind that didn't chill, but just cleaned out the cobwebs of my mind. I'm still tired from not getting enough sleep last night, but the walk did me a lot of good. I went round to the post office, which has moved, so I got a little extra walk in, and just enjoyed my green-tea-with-lemon weather, thinking all the while that I would definitely come home to a cup of that in the end! And I did! 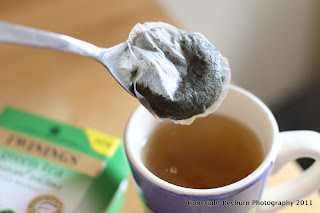 I've also discovered that green tea has caffeine in it. When I first started drinking it, because there were so many 'organic green tea' options and everyone I knew who drank green tea either practiced yoga or recycled things, I figured it was caffeine free. Boy, was I wrong. For the first few weeks I started drinking it (and I loved it - four or five cups a day), I found that I just couldn't sleep at nights! I was up till three, four in the morning and couldn't figure out why. (Generally I don't drink caffeine at all if I can help it.) So one night at 3am I decided to google it, and lo and behold green tea has caffeine! No wonder! But thanks to my good friends at Google I also found that you can decaffeinate green tea yourself. Here's the process.

First, you make a normal cup of green tea. Put the teabag in, pour the water in. Then, you wait about 45 seconds to a minute - long enough to get it steeped, but not so long that all the flavour is gone. Then pour all the hot water out, leaving the teabag in the cup. Then, refill the cup with new hot water. Apparently most of the caffeine is released in the initial minute of steeping, and the rest is just flavour. So by pouring the water out, you remove the caffeine, but still get the lovely, clean, organic of course!, green tea flavour without being up to the wee hours of the morning. 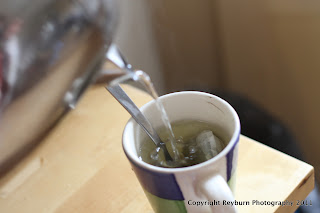 It seems to work fairly well, although there have been a few times I've been a bit too eager to pour out the water and ended up with a little more caffeine than I expected, and a few other times I've waited too long and my 'green tea' tastes more like plain old hot water, but it's a fine art. As with all artistic efforts, the results are well worth it!

And now I'm drinking my decaffeinated green-tea-with-lemon and enjoying the fresh, clean, light, breezy flavour. Like the weather today.