Today I actually selected and purposefully chose a tea I know I absolutely don't like. I might even go so far as to say that I hate it.  Actually, it's not so much the flavour or the smell or the taste that I'm opposed to in and of themselves: but I don't think any of them belong in a teabag, or a cup of tea.  In my mind the connection just doesn't match.  When my dad was in the Navy, one of his worst food memories is the day he took an entire plateful of what he thought was hash browns, the way the Americans make it: grated potato, fried golden-brown and absolutely delicious.  Unfortunately he took one bite and discovered it was sauerkraut, which he doesn't like.  Of course being in the Navy you don't exactly leave behind food you just can't be bothered to eat, so he had to finish the entire plateful.  I don't think he's had another bite of sauerkraut since, and that was close to 50 years ago.

The same applies to this tea.  We like to call it 'smoky tea' because that's what it smells like.  It has all the aroma of a barbeque, a campfire, or woodsmoke.  It's exactly that smell you get when you've been standing in front of a bonfire all night, and you get home and take off a piece of clothing and suddenly stand back a bit, realising how it smells so smoky.  That's what this tea smells like.   If you close your eyes, you can almost hear the crackling logs, see the sparks flying up and disappearing into the night air, listen to the laughter of friends and someone softly playing a guitar.  There are marshmallows being roasted and maybe even some freshly caught fish being cooked over the open coals.  The trees creak with the wind and the breeze fades in and out - and the smoke wafts in, and you're back to your cup of tea.

Which is why I think it's odd.  When I'm having a cup of tea, I'm generally in my house, or at a lovely restaurant, or a beautiful tea room.  I'm sitting on a sofa, or even in bed, or at a table.  It conjures up images of teapots and sugar bowls and milk jugs and silver teaspoons and slices of lemon and, quite frankly, fairly girly things.  Flowers and roses and pink and pale pastels.  So to have all that in your mind and then suddenly with one sip to be transported to a very male situation, with dirt and wood and fire and forests and wild animals calling out into the night, is a bit of a shock.

The even stranger thing (and this is slightly annoying) is that after the first few sips I really start to quite like it.  I rebel against it for a while ("Ew! I hate this tea! Blakthp!"), but I keep going back to it!  There's an addiction, a draw, that I just can't seem to resist.  Once I realise I'm at the campfire, I'm really enjoying it.  I'm almost reaching out to roast a marshmallow!  May as well, I figure.  I thought I was going to a tea room in the city, and found myself outside in the woods, but when in Rome.... 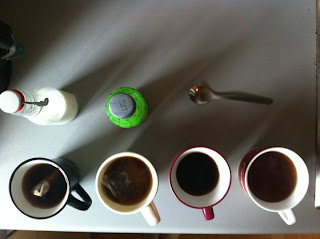 Partly to try to figure out just how I like this tea, and also partly to get rid of the remaining teabags which are using up precious cupboard space, I have today tried drinking this tea in four different forms.  First, normal steeping, nothing added.  Secondly, longer steeping, so that it's almost black.  (It's a very dark tea.)  Third, with lemon.  And finally, with milk.  I almost never do that, but I really am curious what happens to this tea with these changes, and as mentioned it's a great way to exhume my cupboard and salve my conscience and move on from this very confusing tea!  My reviews are as follows:

Normal steeping - best. As mentioned above, I hate it at the start and then find myself drinking it to the dregs.
Heavy steeping - not bad. Brings out the best of the flavours and is not bitter, surprisingly.
Lemon - disaster.  Campfires and manly things like heavy boots, axes, fire, and rugged places do not go with little slices of lemon (or drips of lemon juice from a bottle).
Milk - it's okay, but I can feel the tea protesting.  "I'm complete in and of myself!" it insists. "I don't need these additives - you're simply weakening me, sapping my strength! Let me fight, let me stomp around in my camping gear, let me put up the tent!  Don't send me to a corner and add a baby's drink to me!"

The conclusion is, I hate this tea.  You should definitely have some!