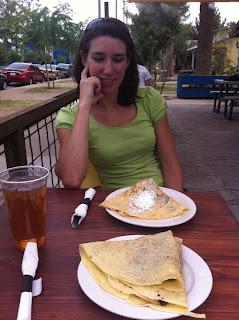 Today was my last day in sunny Phoenix, and as my flight didn’t leave until 8pm, I seized the opportunity to spend a little QT with my sister Laura.  I had a LivingSocialvoucher for a coffee place called Jobot, down near 5th Street and Roosevelt, and we thought we’d give that a bash.  I really love LivingSocial.  Other than the failed Arizona International Festival, which was an ultimate disappointment, all my other LivingSocial purchases have enriched my life experiences. 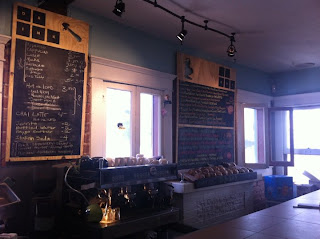 Jobot is in a strange part of central Phoenix.  It’s an area where two blocks north you’re doing some nice shopping and buying a Starbucks; two blocks west you’re potentially buying a house; two blocks south and you’re cheering on the Diamondbacks; and two blocks east you feel like you’re going to get shot at.  But right where Jobot is makes you feel like an artist.  There are little houses that have been renovated and spruced up (but not too much – they still maintain their roughed-up, grunge feel), some as artist blocks, others as galleries, and Jobot as a coffee place.  It’s a classic grunge café, complete with peeling paint in various colours, old furniture, a random bathtub in the toilet, various memorabilia you’ve never heard of before (for instance, instead of a little wooden milk truck it’s a wooden beer truck), outside tables with misters to keep out the heat, and very down-to-earth staff who are friendly but you also get the feeling that they’re writing a novel or dreaming up three different business ventures while they’re making your tea. 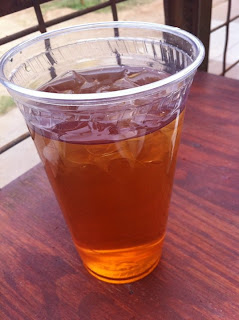 In terms of a tea experience, the taste was excellent but the knowledge was a little lacking.  I chose the Desert Blossom tea as it sounded like a nice white, perhaps with peach or pear or even prickly pear flavour to it.  But when my tea was delivered to me, I asked, “Is this a white tea?” hoping for some more details, and the server just looked at me as though trying to decide if I was asking a daft question or if he ought to know this, and said, “No, it’s a dark tea”.  I stared at the very pale iced tea and then back at him and decided to just leave it.  I guess I’ll never know what’s in it.  He was funny though – he had a little trouble making my sister’s Sweet Peach tea, getting remnants of tea leaves floating merrily about at first, and had to try three times to get it right.  It’s the kind of place where you don’t really mind when that happens, especially when he said very matter-of-factly, “This is becoming the most difficult task I’ve done all day, making this one cup of tea!”
We ordered savoury crepes which were excellent – mine was root beer pulled pork with jalapenos, and Laura’s was a Monte Cristo.  We enjoyed both, and our teas, immensely, and I’d highly recommend the place.  Just go with a relaxed mindset and you’ll be all set. 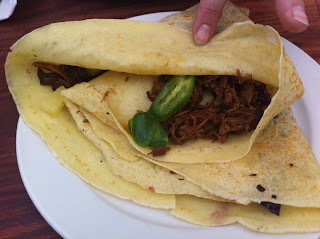 My walk was short today – I got a late start and on the last day of May in Phoenix, you don’t want to walk too far at 11am.  It did start to cloud up a little, so we did about 20 minutes round the block, but even that seemed to wipe me out.  I think I’ll be glad to be back in Scotland where I can go for a walk any time day or night, and my only query is how heavy of a jacket to put on!
Walk length:  20 minutes
Posted by Karen Reyburn at 11:47