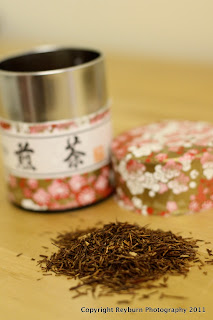 Having begun my blog with a simple Scottish tea, I thought I'd leap right in on day two with a completely different kind of tea.  My sister bought me this one, called Caramel Rooibos Tea.  I've tried a number of different rooibos teas in the past (but not on this blog, so you will experience them later!), and I like the brown, earthy-yet-light flavour.  It makes me think of African deserts and tigers and giraffes and dried grasses and other things of varying shades of brown.  I started drinking it when reading The No. 1 Ladies' Detective Agency by Alexander McCall Smith - I remember noting that she was drinking "red bush tea" and made a note to try it.  Apparently red bush tea in Afrikaans is 'rooibos', so that's where we are today! 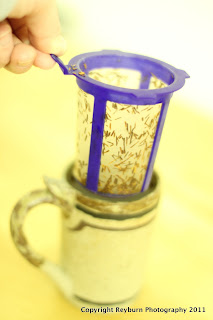 This is loose-leaf tea, which gives you the best flavour.  I have a few options for filtering it...one is in a spoon, which is handy for a one-cup option, and the other you just put the tea into it and lift it right out.  I decided to go with the liftable one this time, as it works a little faster, especially with a tea like this one that doesn't require a great deal of steeping. I also chose my mug very carefully, as it seemed to represent the national flavour of the rooibos tea by being rustic, with a variety of browns.  (The mug is from Cyprus, but that's also a hot, dry country, so I think it works.)

I generally drink tea with no milk or sugar so that I can get the full taste of it, and this tea is no exception.  The caramel flavour adds a smoothness that normal red bush teas don't have (they have a sharper bite at the end, I think).  I'm starting to feel like one of those wine tasters!  "Sharp, almost nutty, with a slight bite near the end..."  Well, tea is certainly its own flavourful journey, and I'm enjoying mine now. 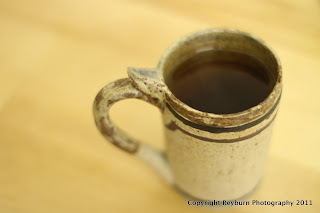 My walk today was three circuits round the track of the local leisure centre - perhaps all my travelling is catching up with me, but I am just clean worn out by the end of this day.  But I got some good fresh air and exercise, it wasn't raining when I went out for my walk, and now I'm sitting inside with a lovely cup of smooth brown caramel rooibos tea!