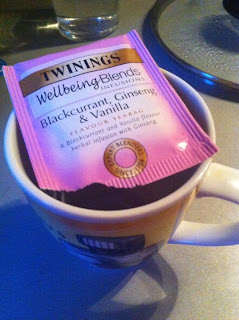 You can tell I'm hitting the bottom of the barrel here.  I'm not a huge fan of ginseng - it's a really powerful flavour like cardamom or ginger.  But, this is a tea I haven't had on this blog yet, so here we go!

In this instance, the ginseng (as with the other intense ones noted above) just takes over everything. The blackcurrant is a pretty serious fruit, and is no mean competitor, but ginseng insists on having the last word.  Vanilla is a bit of an afterthought, like something they had to scrounge around for at the end, when they realised that things weren't going as smoothly with this tea as originally planned.  And the only vanilla I actually taste is probably something that's in my head because it's listed on the packet - they could have left it out and I wouldn't even know!

My walk today (Wednesday) was an excellent one - I went out in the morning, as planned, and came back rejuvenated and enthused, as planned.  Check!