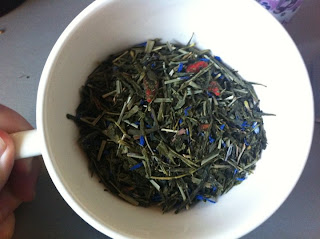 Today was another one of my loose-leaf extravaganzas! To be honest, I have no idea what gojiberries are, and bought the tea simply because at the shop (Teas Me!)they opened up a box of it and it was so pretty, with blue flower petals and red dried berries and green tea leaves, and it smelled heavenly.  I've had it a few times now, and it's one of the strangest green teas that I have.  First, it actually smells better than it tastes.  I like the taste pretty well, but the smell is so exotic and powerful, whereas once it's steeped it's still a very light green tea.  Secondly, it tastes better with the first cup than with the second or third - whereas some green teas are much more powerful the second or third steeping. 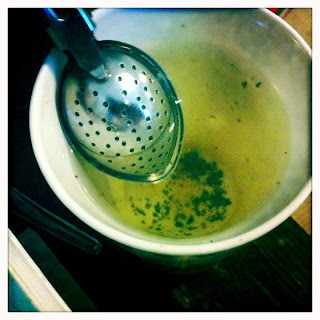 I wasn't even sure if a gojiberry was a real berry, but it appears to be.  This tea has blueberry and pomegranate flavours, with blue cornflowers for colour and even some lemongrass in the tea!  Makes for an intense taste that you can have over and over again from just a few teaspoons of dried tea.  It makes me wish I could drink green tea late at night, but even though green tea is lighter in caffeine, it's still there - and my little trick of decaffeinating the teabag doesn't work so well with loose leaf tea!

My walk today was to visit one of the older housebound ladies, and then to the grocery store and home.  I must still be getting over my exhaustion because that about did me in!

Time for another cup of tea and then bed!