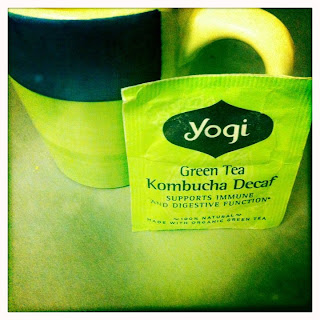 I didn't think it was possible, but I really am starting to run out of teas in my tea cupboard.  Today I looked through the whole thing to find one that I hadn't tried, and I think there were maybe one or two (and it's late, so I don't want something with caffeine). Come on, I've got less than 30 days to go!

I guess that means I need to start stocking up again.  The hard thing about tea is that it doesn't really come in the one-size servings. You generally buy a box of tea with about 20 or even 40 teabags in it, or loose leaf tea that lasts for months, and that's it for the one kind of tea!

But my friend Sylvia came to the rescue with this one.  She gave me a random teabag a few weeks ago when I was in the States, and said that it would serve me well if I ever hit a day where I didn't have a new tea to try. She was certainly right, and today I scrounged around and found the Kombucha Decaf green tea, and poured it out. 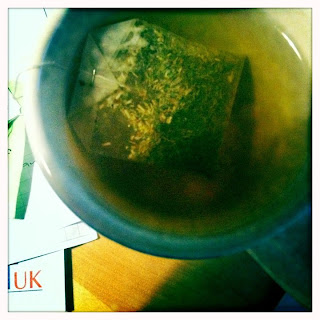 It's a lovely tea for the end of the day.  As soon as I poured the hot water over the teabag I could smell the mint (spearmint, according to the packet).  I'm starting to enjoy trying to figure out what's in a tea before I find out.  Normally I'm not a huge spearmint fan, but mingled with green tea it's incredible. I love it. I think this might be my new favourite bedtime tea.  Celestial Seasonings has one called 'Sleepytime' which I love simply for the name (the taste isn't bad either, and it has a little mintyness to it), but this one has a flavour all of its own. I even smelled something slightly fruity, and lo and behold the packet informs me that there is 'natural plum flavour', as well as passion fruit.  There's lemongrass, too, which I didn't pick up, but it merges very well with the light fruit flavours and the green.  (Green tea with lemon is one of my favourites too, so that makes sense.)

Kombucha is the key ingredient, which I'd never heard of, but I've looked it up and it's apparently made from fermenting tea! Mmmm.  The packet proclaims that it 'supports immune and digestive function' (which is, to me, a very odd statement to make on a tea packet), but Wikipedia insists that the proof of medicinal purposes is few and far between.  Well, never mind. I've found a beautiful tea that's decaffeinated, and my only problem is that it's sold in the States!