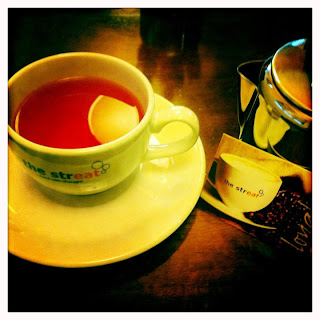 Tonight I went into Glasgow to meet up with a friend who was in town, and had a few minutes to spare beforehand, so of course I went in search of a good cup of tea. Sadly, my favourite tea shop which I had only visited once (Brewhaha) is now closed, so I was pretty disappointed about that.  This recession is driving me crazy. You find an amazing place, you visit it once or a few times, you rave about it, you blog about it, you tell your friends...and six months later it's like it never existed.  Come on, businesses! Pull yourselves together!

In place of it, though, was The Streat, which amazingly enough we happen to have one of in Airdrie. I remember having gone into our one several months back and ordering tea, to be told that they had loose leaf teas and being able to choose one.  This was well before I got into my tea blogging, but even then I realised the amazing difference in a loose leaf tea.  So, I walked into the Streat cafe at Buchanan Galleries and looked at their teas listed, but couldn't tell whether I was going to be presented with Twinings teabags, or a loose leaf infusion, so I asked. The kind lady behind the counter explained that they used to have loose leaf, but now they have these infusion bags, the ones that are like thin muslin with the loose leaf tea in them. I've had them before and they're lovely.  The teas they had didn't overly impress me (although the Earl Grey Blue sounded lovely, earl grey with blue cornflowers), but I went for a decaf one, Red Berry. 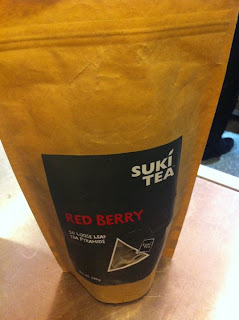 It was okay.  There is an odd taste that some fruity herbal teas have, like a rubbing at the back of your throat, and I'm not a big fan.  I was hoping that the little infusion teabag would make a difference, but either I didn't steep it properly or it just wasn't the flavour I like ("red berry" did sound a bit vague - I'm starting to prefer specifics, like what kind of berries? and what else is in there?).  Of course, being British, when she asked me how I enjoyed my tea I said oh, it was lovely.  Classic.  What else do you do?  And it was lovely....it was lovely sitting there on a comfortable couch watching the world pass by.  It was lovely that the lady actually spoke to me, and chatted away, and let me take photos of the tea bags (looking at me very oddly!), and cared enough to see if I was enjoying it.  So yes, I enjoyed my tea, although I probably wouldn't go for that one again. Maybe the Earl Grey next time!

After my tea I waited a little while outside for my friend, and sat outside on the steps near the Glasgow Concert Hall.  The sun was setting, so I sat with its rays warm on my face listening to a man play the guitar, in that early-evening-glow of happiness and rest and quietness and peace.  Even the people walking by and the apparent drug dealers to my right and fake-homeless-guy to my left were quiet.  (I say fake because he put his hand gently on my arm and said, "God bless you, God bless you", which especially in Britain just sounds like one of those phrases people say so that you will think well of them.)  The guitar man played La Bamba and then he played Simon and Garfunkel's 'El Condor Pasa' and I sat transported back to my childhood when we listened to the latter while we folded laundry in the house.  (Not so much La Bamba, but to guitar-guy's credit, he managed to make that relaxing and peaceful, too!)

After my little time of rest we went for dinner at a completely random Italian restaurant, whose name I don't even recall, and then we went to the Glasgow Film Theatre, which I'd never been to.  It shows independent films, which usually means subtitles and sometimes very odd plots and characterisation. They even handed out a wee paper that explained the film, but Joel and I looked it over and he said he got the jist and I said I didn't understand a word of it, and we settled back to enjoy the film. It was really, really excellent. I forgot how long it had been since I watched a film in which I had no idea who was going to live or die, and how it would end.  The one sentence in the review they handed out that I did understand, and appreciate, was, "Savour the vicarious thrill of Point Blank while you can before some movie producer casts Daniel Craig or Matt Damon in the inevitable remake."  Now, I'm a pretty big fan of both those gentlemen, and don't really mind seeing anything with them in it.  But I forgot that when you're watching a Daniel Craig film, you know that he's going to win. You know that he will very nearly get killed several times, but he won't die.  You're pretty confident that his lady will live too (although to be fair that can be up for debate, and has been, in both Daniel and Matt's films), and that all will be more or less well in the end.  Because, of course, they have to live to play in another film.  But here, in the Glasgow Film Theatre with French subtitles and real-looking people and the hero running until he can't breathe anymore, you really aren't sure. I gasped a lot. I found myself sitting with my hands over my mouth in terror while he went in search of some very evil men.  Because in an independent film, anything can happen.

I'd highly recommend it.  Well worth a go!