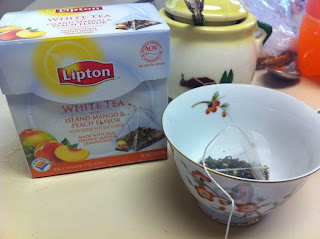 Today's tea was a very pleasant surprise.  It has been my experience (strengthened by a whole variety of Lipton green teas) that in general Lipton should stick to iced tea and leave other flavoured teas well enough alone.  But today at my sister's house she offered me white tea with mango and peach, and I just couldn't refuse. I really, really love white tea.  I didn't even notice it was Lipton until I was taking the photos - but the tea was in this great little infusion packet, which means it's not just a teabag, it's the closest thing to loose leaf that you can get without buying a packet of it at Tea's Me! 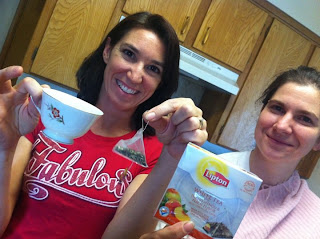 It was definitely a winner.  White tea is fairly light at the start (particularly if you don't oversteep) and with the fruit flavours especially requires no sugar or additives of any kind - which is my favourite kind of tea to drink.  The mango and peach came out surprisingly well; it's the kind of tea you can sit and inhale almost instead of drinking, the scent so powerful it's like taking a sip.  I like the word 'island' in the tea title...perhaps it's my vibrant imagination, but when I close my eyes and breathe it in, I really feel for a moment that I could be sitting on a beach house, about to be offered fresh fruits from the mango and peach trees. 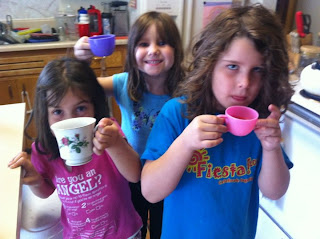 It really is almost addicting, white tea. I find myself drinking several cups of it, and not even realising it until I'm feeling all awake and alert because of the extra caffeine. White tea doesn't have a great deal of caffeine (less than green), but enough to prevent sleep if taken late enough at night, which Heather and I discovered a week or so ago when we tried the White Kiss-And-Tell tea.  I had forgotten that the white kiss-and-tell had a pinkish colour until I re-read that blog post: the tea today poured out with a slight peach colour, which made sense.

Sylvia and Laura's girls got in on the tea party with a teapot and cups of their own, and wanted to be part of the photo-taking as well.  They were keen that they all be evident (with their tea cups) in the photo, so I think we did fairly well (some teacups taking priority over faces).  It started raining while we were chatting inside, and for Phoenix that is an odd enough circumstance, resulting in almost all the children rushing around for umbrellas, opening them, and then carrying them about the house, strangely enough.  One of the girls handed her open, wet umbrella to her mother saying "Hold this for a minute", and Sylvia sat there with her cup of tea, laughing a little as she twirled her umbrella at the kitchen table.  "It rains so infrequently here, we really don't know what to do with umbrellas!" she said. 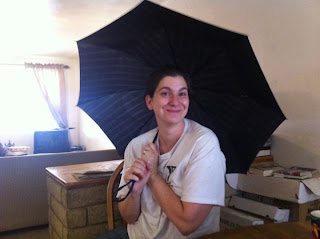 My walk this morning was a shorter one - I haven't been getting as much sleep as I should, and have been up at the crack of dawn most days, so Pin and I went up the hill and around where the expensive houses are, and back round to our house.  About a half hour, which was enough to wake me up and refresh my senses without completely wearing me out.  I did feel very sluggish and laggardly as I tried to encourage my feet to move along smartly.  Pin's feet seemed to be with the programme a lot better than mine were, and mine weren't even being competitive.  They were happy to be second rate today, so I gave up after a while and just enjoyed the walk.  I did love seeing all the desert flowers and cacti so I think I sense a blog post coming just on that.