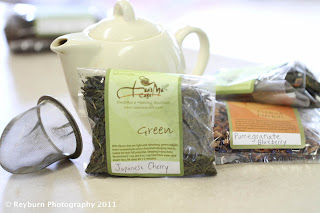 Today was a second-in-a-row beautiful day here in Indianapolis. I was going to have a bit of a lie in, but my body cheerfully woke me at six a.m., so I willingly got up and went for my walk (after the standard cup of green tea, this morning orange, passion fruit, and jasmine). It was fairly chilly outside, even a slight frost on the front lawns and house roofs, and I could see my breath as I walked along. The forest walk that I take here is beautiful - green leaves and blue flowers and the smell of something so fresh and clean that I almost thought I was smelling clean laundry. 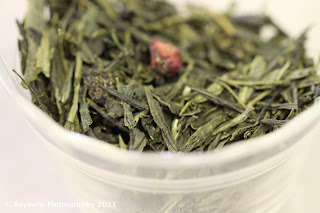 Later this afternoon Heather and I went downtown, to a tea shop she loves called Teas Me Cafe. We only made it in there a few minutes before closing time, so we made the most of that time by ooh'ing and ahh'ing at the board of teas. I was in tea heaven. Loose leaf teas in abundance, with a list of green teas that warmed my heart. I ordered a green mango and green Japanese cherry before I even saw the list of white teas, so I threw in a white tea (you'll hear about that one on Saturday), and just before we were about to leave we were introduced to a pomegranate and blueberry herbal tea which I had to have as well!  The owner, Wayne, was incredibly helpful as we debated his entire collection of teas - the kind of person who shows you a new kind of tea because he genuinely thinks you'll like it, not because it's the latest and greatest one or even the most popular.  He opened the tin of pomegranate and blueberry and we both leaned in for a whiff, and stepped back with an 'oooooh, that's SO nice'.  We added that to the pile of teas I was buying, and I took a cup of iced white mango tea for the road.  We dandered the canal for a little while and later on drove back home. 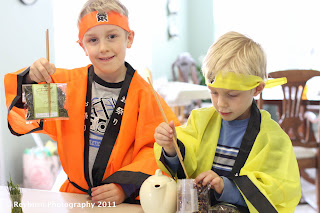 So, tonight, while Heather went to 4H with the two oldest children, I stayed back to have my tea for the day. I couldn't decide which of my new teas to try, so I enlisted the help of two of the younger children.  Kids  are absolutely brilliant.  I love the way their minds work. I kicked off the 'creativities' by suggesting that since I was having the Japanese Cherry green tea, they could get me a few Japanese items, as their dad had just gotten back from a trip to Japan recently.  They went rushing away to return in full Japanese regalia, with Japanese coins, chopsticks, and a Japanese stamp. I took a few photos of the green tea leaves (complete with Japanese cherry blossoms in the tea), and then the ideas really started flowing. 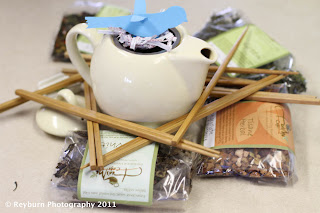 The boys lifted the tea with their chopsticks, sliced the air with karate moves, and then came up with the idea of using the chopsticks to make a nest under the teapot.  Then there was an excited flurry while a small bird was produced, and we settled the bird on the nest. It was happy to nestle into the Japanese nest we had created. 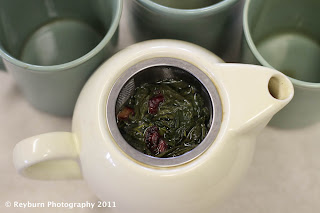 When we finally poured the hot water into the strainer, we rejoiced to see the dry berries suddenly became awake and alert, a bright red colour appearing amongst the greenery of the tea.  Then we poured it out into three green cups (to match the fact that it was green tea), with two smaller mugs for the boys and a larger one for me ("to match our sizes").  Finally it was time to actually drink the tea, and again the boys' minds were rushing about to have more than just tea.
Whilst I drank mine plain, to take in the full flavour of the pale green tea with a slight fruity flavour, the boys added milk, vanilla, and sugar.  I think the sugar was probably their favourite part, as the tea disappeared much more quickly after that. (They were also suggesting cinnamon, ginger, and about twelve other spices which would have completely overwhelmed any of the tea flavour I was trying to achieve, so I left them to their own devices and enjoyed the flavour of my own.)  One of the boys ran to get a tripod so that we could capture all of us enjoying our tea together, so I got to actually be part of my photo this time! We even brought wee Laura into the picture, and the boys insisted that the one with her in it was the best picture of them all. 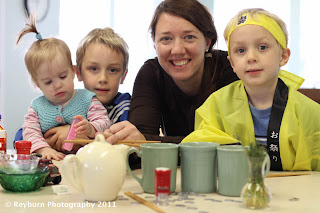 Green tea is such a pleasant flavour...it manages to be full-bodied and light at the same time.  I can drink five or six cups in a day without feeling that I've had too much, and as always any fruit flavour enhances it without any bitterness.  There's a slight exotic hint to this one, and a sweetness that not all the other fruity green teas have.  And, of course, as with all loose leaf tea, the flavour is most perfect the first time round.  If I were to try to decaffeinate this one I'm sure I would lose most of the exquisite tastes. 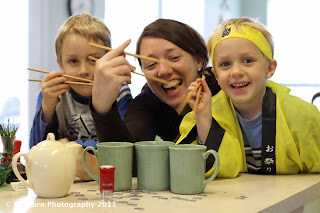 So, a great thank you today to Heather for introducing me to Tea's Me; to Wayne, who welcomed us in and shared with us his bounty, and to the boys who made me laugh, stirred up my creativity as well as their own, and truly enjoyed the tea experience with me.