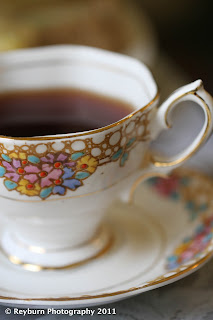 Well, Heather and I set out for a very nice tea at a beautiful tea room today, but it didn't quite turn out as we had hoped.  I think I can safely say this was the worst tea experience of my 35 days drinking tea every day, and I might even throw in the past year or so of drinking tea also!

We first went to the Indianapolis Museum of Art and oooh'd and ahhh'd at the beautiful flowers and walkways. Heather even took a picture of me! (It's very rarely that I get photos taken of myself, and even more rarely that I like them! Poor anyone taking a photo of a photographer.)

So then we went downtown to this beautiful tea room to have a proper lunch tea, complete with sandwiches and sweets and three different kinds of tea.  We were running a little late, so we rang them to let them know, and they very graciously said that was fine and they would see us when we got there. We had stopped at Roberts Camera Store and spent a little while with a very helpful guy named Scott who gave us the 411 on all the cameras and lenses and camera bags we might need.  We had a lot of questions and he was really knowledgeable. He was the kind of person (like our friend Wayne at Teas Me Cafe) who helps you simply because he loves to help, and believes that it will work out well in the end (instead of pushing on you things you don't want to buy).  At any rate, we were running late but we made it to the tea room in the end. 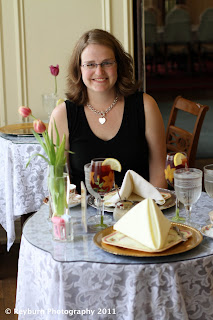 It's called Signature at the Propylaeum, and it is an absolutely beautiful house from the outside. I was going to take photos of the place after our tea, but I didn't end up doing that.  We went in and were welcomed, and we just loved the little teacups everywhere, the furnishings, the little teacup with sweets in it, and the entire setting.  We were seated at one table, but there was a bit of confusion which table we were supposed to be at.  A few servers weren't quite sure what to do with us, but finally got us settled at the proper tea table.  There were drinks sitting waiting for us, which were I think meant to be a sparkling juice of some kind, but it appeared they had been sitting there since the time of our original reservation a half hour before.  Any fizziness had faded.  We drank them, and they were nice enough, although not overly impressive.  A few minutes later we got our tea food, and I have to say we tried very hard to be positive about it.  But after a little while we admitted to each other that it really was quite poor indeed.  Everything not only looked, but also tasted, as though it had been prepared either first thing this morning and had sat in the fridge since then, or perhaps even earlier in the week.  The sandwiches were dry and squished, the chocolate-covered strawberries looked limp and pathetic, and the sweets a bit dry as well.  And the scones were a disaster.  Having tasted fresh scones at Serenity last week (and knowing that it is the same caterer who provides food for both Serenity and Signature!), we were pretty horrified.  There was nothing anywhere near the lovely, fresh, exquisite experience we had been hoping for.  Our tea never arrived, so we had to ask for it, and when it did arrive it too tasted like it had been made for our arrival some forty minutes previously and kept warm on a stovetop or under a tea cosy. It was raspberry tea, but so dark that it looked like black tea. 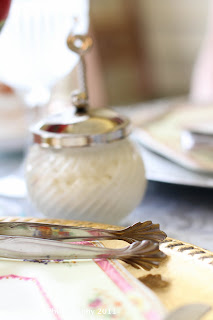 Sometimes I'll mention it to the staff or servers if my food is substandard, but many times I let it pass.  It's not a big deal.  But after 35 days of drinking different and beautiful teas every day, I didn't want to miss out on an opportunity to really taste the teas they were giving us - and there were supposed to be three kinds in total.  So we hesitantly (and feeling terrible about it) mentioned that the tea was warm, not hot, and could we get some fresh tea made?  Our server was fairly grumpy and didn't seem too pleased that we weren't just sitting quietly not making a fuss, so he whisked our cups away and brought new ones.  The next tea he poured out was a pecan rooibos, and it was fairly nice, although again still tasted only warm, not hot.  And worst of all, we had to ask where the third kind of tea was, and our server said, "Oh, I guess we used to have a third one, but I have no idea what happened to it" and his attitude added the nonverbal, "and I don't really care".  Poor Heather and I sat there trying to pretend everything was just lovely and we finally admitted to each other that it wasn't. Either the place or the server or the caterers were having a bad day, or else it is like this all the time - we weren't sure.  Heather is very much not the kind of person to make a fuss or complain if things aren't right - but the normal price for this tea was $18 per person, and right now we were feeling that it wasn't worth the $2 we had paid for a voucher to get a discount, much less the full price.  So she went to speak to someone, and the lady she spoke to was very pleasant and friendly and sorry we had a bad experience, but couldn't really do anything for us. She said she would speak to the caterers. So we left it at that and tried in vain to find someone who would take care of our bill for us.  Heather walked around the entire downstairs looking in every room except the kitchen, and finally came back and sat down and we just waited until someone appeared. 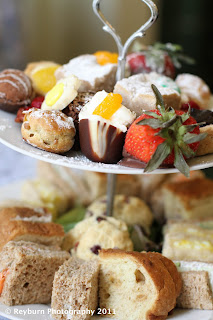 The woman who appeared came to take our bill was friendly enough, and asked genuinely, "How was your tea today?"  I hesitated for a few seconds, looked at Heather, looked back at the woman asking, and decided to tell her the truth. I could have just said it was fine and smiled and left, but I really felt that maybe it was just a bad day and she would be horrified and want to fix it so no one else would have a similar experience.  So, I explained.  I told her that to be honest we hadn't really been impressed, and we were sorry, but the tea wasn't hot and the sandwiches were dry and didn't taste fresh, and....I didn't even get to finish when she took the bill from Heather and said, "Well, then don't pay if you didn't like it.  I wouldn't want you to.  I'm sorry you didn't like it.  No need to pay then, you can just leave.  Goodbye".  I was horrified.  I've never been so summarily dismissed by someone to whom I'm trying (as graciously as possible) to explain that my experience was not entirely up to standard.  We were a bit shocked, but there was nothing else to say, as she had cut me off in the middle of explaining what had happened, and walked back into the kitchen.  So we started gathering our belongings when she appeared again, briskly whisking away teacups and teapots, and said, "I'm sorry that it just wasn't up to your standard.  I usually get 100% ratings."  By this time I can't for the life of me figure out who from, since I've since read a good number of reviews online and most of them are saying the same thing that I am.  And since we were going to be the paying customers (we tried to pay), isn't it our standards that matter?  I actually felt much more annoyed and disgruntled after expressing my concerns than before: because now I felt as though she had figuratively grabbed me, whirled me about, kicked me out the front door, and told me to never come back. 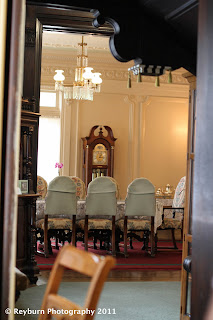 Well, she doesn't need to worry.  Neither Heather, nor I, nor (I hope) any of you will ever go there again.  To add insult to her injury, we stopped at our favourite Teas Me Cafe on our way home (to get the nasty taste of bad customer service out of our minds) and ended up telling them the whole story.  When they asked where we'd been and we told them Signature, they got a knowing look and said 'Ooooh, yes, we've heard a few things about them'.  Which makes me and Heather feel a lot less like horrible criminals and much more like normal people who would just like a good tea experience, especially for the money.  Fortunately for us, we got it (as we always do) at Tea's Me.  I told them about the other green and white teas I'd tried already, and they recommended some new ones which I'm very excited to try - a green chai and a green gojiberry.  So, we chatted with our friends, bought some incredible tea, and as we walked out the owner actually apologised that we had had a bad experience at Signature today! If only the lady we had spoken to had done the same - and changed a few things as a result.

The funny thing is, the photos all make it look so lovely!  But if I've learned anything about doing business in my life it is that even if the venue and sometimes even the product are right, the service makes all the difference - one way or the other.  I just wanted the lady at this tea room to listen to me, hear what I had to say, and want to do differently.  She just wanted me to go away - so I did. 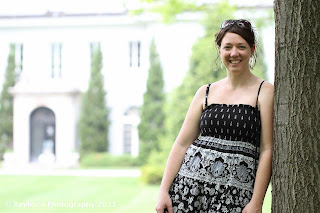 My walk earlier today was the standard 45 minutes walking and running, but my goodness it is getting hot outside!  I guess I'm getting ready for Arizona weather - which comes tomorrow!