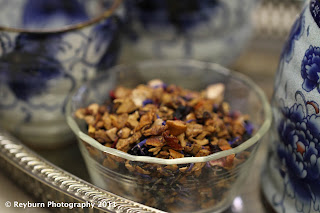 Today's tea was another loose leaf from the Teas Me Cafe which I blogged about a few days ago when I tried the Japanese Cherry green.  If I could, I'd spend probably hundreds of dollars at this cafe...but it's also kind of fun to try to choose from the entire blackboard of teas that are available there.

One of the ones that made it past the rigorous choosing process I put it through ("Does it have a cool name", "Does it smell amazing", etc) was the Pomegranate and Blueberry.  This is one of those teas that almost seems like it doesn't have a tea leaf base because there's so much fruit in it.  You could probably make a snack of the tea itself after you've made it.  (Side note: the boys did this with the green tea leaves a few days ago...I actually had to stop them once I realised that it was almost 9pm and they were cheerfully eating green tea leaves with caffeine in them!) 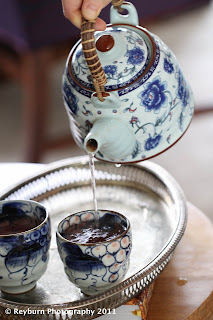 So Heather and I tried this tea tonight while we sat down to watch The King's Speech, which I hadn't seen yet.  Seemed as though everyone I know has seen it, and I had an opportunity to watch it on the plane over to the States, but I've learned from previous experience that you miss a great deal when watching a film on a flight. So Heather and I poured the tea, and sat down with it to watch our film. It was fitting, to watch a film about a British king while drinking fresh-poured loose leaf tea.

This tea is a refreshing, fruity one - it tastes just as good cold as it does hot.  I definitely could taste the pomegranate, and it pours out in almost a mauve colour.  We drank it in lovely little Japanese teacups that Michael had brought back from Japan, which was a wonderful idea until we realised we'd filled our cups almost to the brim and we couldn't hold them without burning our fingers! We worked it out in the end, and drank every last drop of this tea with no side effects as it's a herbal tea with no caffeine. 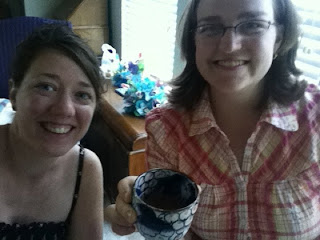 My walk today was a good solid one: it turns out that my standard walk, which I thought was about 30-40 minutes including a run (so it matches the one I walk in Scotland), is actually 45 to 50 minutes with no running.  So today (Monday) I walked some and ran some and it was still a 40-45 minute effort.  Perhaps when I get back to Scotland I will just breeze right through my daily trek!