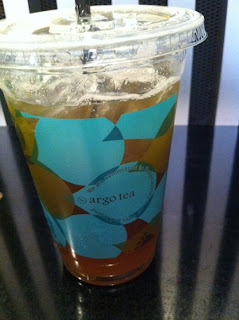 Today I got on a plane (three planes actually) and flew to Indiana to do a wedding there. I love travelling when it's for photography: it just makes the whole trip more enjoyable. It does mean that I carry a lot more equipment and bags than I normally would, but that's just part of the deal.

When I arrived in Chicago O'Hare airport, I passed a place called Argo Tea and, of course, stopped short.  I wasn't sure that I would get time to have and photograph and write about a cup of tea by the time I got in and settled at my friends' house in Indianapolis, so here was my opportunity.  I stopped and stared at the vast array of teas available - it seemed almost like a tea bar, with teas named things like Earl Grey Vanilla Creme and Carolina Honey and Moji Tea.  The Moji Tea struck my eye, because I must admit I'm a big fan of the mojito (witness my highland mojito which was pretty incredible), and this sounded like a non alcoholic version of it. 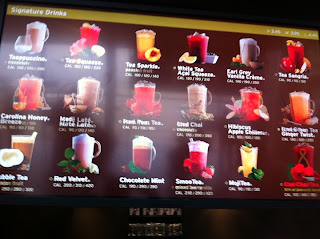 True enough, I think that's exactly what it was. Mint sweet tea with sparkling water, mint leaves, and lime.  WOW.  It was like a sparkling bomb going off.  Flavours, tastes, infusions, zest, zeal - this tea had it all.  It was sweet and tart, very like a mojito in style.  The mint made it crisp, the lime made it tart and sharp.  A bit overly sweet - I could have done with about twice as much ice and water.  But never fear, America is the land of free water fountains, so I was able to access some pretty quickly.  The drink was strange - it was as though it both quenched my thirst and increased it at the same time.  I kept wanting to have more, and as soon as I did, I needed a lot of water to help me out.  I did help it along with some extra ice and water, but I didn't completely finish it.  My first foray into an iced sweet tea was pretty intense.

I stopped at an airport Chili's to get some good old fashioned southwestern food (a turkey sandwich where the meat was piled higher than my hand; rustic cut chips), finish my moji tea, and chat to a random lady who was on her way back home from her mother's 90th birthday party.  We chatted about my photography, the royal wedding, Bin Laden's death, politics, birthdays, places to live, Scotland, and about ten other subjects - as you do with a random stranger at an airport. I don't even know her name. It was pleasant passing the time, though, and then we went on to our respective flights. 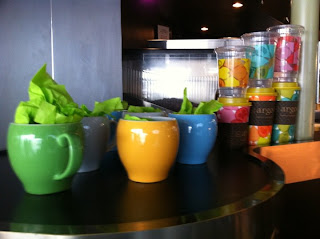 Believe it or not, I did go on my walk this morning. I got up at 5am, hooded up, and walked briskly for 35 minutes - running a little, but not much as for some reason my legs were hurting and I just couldn't seem to drum up any energy at all.  It was tempting to be really discouraged, since yesterday I had run more than ever before, but I refuse.  I insist on pressing on with my 'montage', and the whole point is that there will be days that just do not go according to plan.