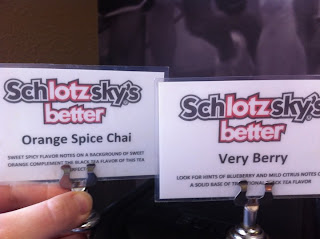 Today I bring you a double feature. My sister and I went to Schlotzsky's for our traditional Sister Lunch (tag line: Funny Name, Serious Sandwiches) and lo and behold they had not just plain old iced tea, but four different flavours of iced tea awaiting my arrival. It's amazing. It's like the whole world has diverted itself towards the tea line everywhere I go!  Or, I suppose, it's that thing that happens when you start looking for something.  You are thinking of buying a Mini...suddenly they are zooming around everywhere.  My mum said when she was pregnant with my oldest sister she suddenly realised that there were so many other pregnant woman who weren't there before! So I guess the principle applies...or else the world is, perhaps, realising the value of tea - proper tea, tea in many flavours, intensive tea that is much better than the run of the mill whatever that the world used to be happy with. No longer.  I'm on day 42 and realising that 90 days may just not be enough. 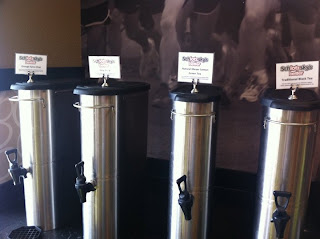 So there were four tea choices, and first I picked Orange Spice Chai.  It was pretty good, but not a very intense flavour. There were vague indications of chai, but as Pin pointed out, since there was no milk, it's hard to 'feel' it as a proper chai of any kind, even an iced tea chai.  I could taste vague inklings of cardamom and a slight, very slight tartness of orange, and there was definitely some spice in there, but overall it was merely a slightly dressed-up version of iced tea.  Like it had thought about going out on the town but decided to just put on a nice pair of jeans and an ironed top, and leave it at that. Maybe even a pair of flip flops since it's warm out.  I added a packet of sugar (which I almost never do to tea, but I really needed some help here), and even a little lemon-green-iced tea and some Sprite. I was really trying (probably too hard), but I just couldn't get a sense of a flavour that I could really delve into. 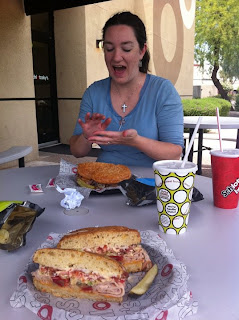 So, when I went back for my refill (ahhh, America, the Land of Free Refills!!), I decided to try the Very Berry tea.  I don't usually confuse the palate with different teas - plus I like to save them for another day in case I need a different one - but I'm starting to realise, as noted above, that I may not need to save them.  I took a sip and just loved it.  The berry flavour was powerful enough to overcome the black-tea darkness, and bring a sense of cheer and joy to it.  Like this one not only dressed up, but also grabbed a little flag and started waving it about jubilantly.  I didn't add anything.  No sugar needed - the berry sweetness was enough to bring plenty of joy to this tea - and I gave Pin a taste and she supported it fully as well.  I drank probably two big cups of the Very Berry before I realised that I was drinking black (ie caffeinated) tea and was going to start shaking from the caffeine soon!

Our walk this morning was a pretty intensive one - I was able to run at least four portions of it, and we went out later than usual (it was around 8am, so it wasn't overly warm, but getting that way), so by the time we finished our lunch and did a miniscule amount of shopping, we were completely beat.  We gave up on any further shopping and came home for a little siesta. 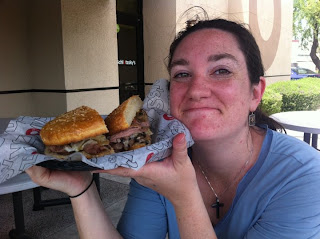