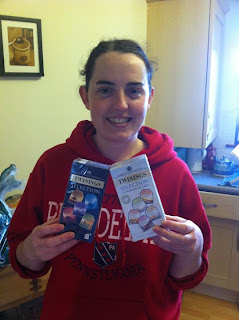 Today my friend Audrey has helped save this blog.  I've really, really lost motivation for it.  Not for the walking - I've been doing brilliant at that.  Even getting up an hour earlier so I have time to write in the mornings, and then go for my walk, and sometimes even run.  It's the daily slog of trying to find a new tea (which is getting harder because I've pretty much wiped out my cupboard), taking photos of it (and trying to make them look different from all the others), drinking it and thinking about what it tastes like, writing out the blog, and then doing it all again the next day!

I'm moaning, I know. The only way this blog is going to get finished is if I stop whining and start 'grinding', as my friend Seth Baker says.  I love his illustration.  He's talking about a video game he played hours and hours and days and perhaps years of when he was younger, and there was a bit called 'grinding' where you just have to kill slime monsters for hours and hours so you can go up a level.

Well, drinking lovely tea and blogging about it is hardly a slime monster...but it's amazing how it can begin to feel like that.  You convince yourself that it's just TOO hard, and you'll do it tomorrow, and suddenly ten days have gone by and surprisingly none of these blog posts have written themselves in the night!! (Where are my elves?) 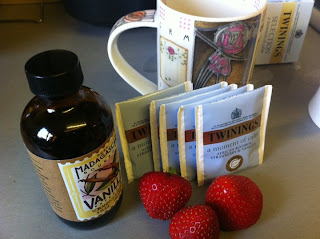 But. Enough of that. If you're reading this blog and want to be an encouragement, write me a comment (here or on Facebook) and tell me to get off my ass and write! Or send me tea! (My friend Heather sent me tea today which I will be trying tomorrow!) Or drop me a text later during the week and ask how it's going.  If you don't, I'm hoping to find the last dregs of my enthusiasm (somewhere on my walk, perhaps!), because I've only got 17 more days to go.

So, as I said, Audrey came in and saved the day today, because she asked how it was going and encouraged me to press on - and to show she really meant it, when we were at Tescos she helped me pick out two boxes of different kinds of teas, and then proceeded to buy them for me! I love it when someone puts hands and feet to their words of encouragement (or in this case, tea boxes and pounds and pence!).

So Audrey and I sat and had a wee cup of tea together - I had the African Rooibos, Strawberry and Vanilla which was just lovely. It truly did have a flavour of strawberries and vanilla, which are an excellent compliment to the rooibos (which has a musty, dusky kind of flavour).  I wouldn't have thought of it, but Twinings did, and they know what they're doing!