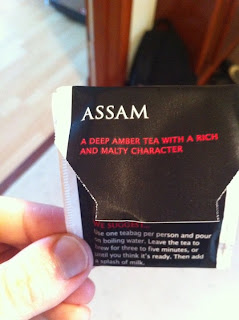 Nearly there. Only ten days to go!  Today's tea was recommended by a friend of mine up on the Isle of Skye...had I tried assam tea?  I haven't, so here we go.

The packet declares it "A deep amber tea with a rich and malty character."  I love the way these tea packets describe their teas. They give them heart, soul, body, and now an entire character.  This tea definitely has that, in spades.  Remember my Lady Grey from the other day?  Well, this is about as different from her as you could get.  None of these floating dresses or silent butlers or silver tea sets...assam tea is rich. Meaty. Heavy duty.  A bodyguard you don't want to mess with.

I have a picture hanging in my parents' guest bedroom at home in Phoenix.  My sister Janice gave it to me when I passed my CPA exam (yes, for those of you just joining me in the last few years of my life, I trained as an accountant, of all things!).  Taking and passing that exam was one of the hardest things - in terms of study and grunt work and sitting inside when I'd rather be out and not getting enough sleep and wanting to give up - that I've ever done.  I worked 10 hours a day and studied in every free moment - literally on my short lunch breaks, sitting in the car at a red light, and waiting in queues.  The only days I took off were the Lord's Days, and I spent those going to worship in the morning and sleeping the rest of the day.  And I had to take that exam three times.  So the day I got that 'pass' letter in the post was a pretty great day, and my sister recognised it, and as I say bought me this picture that means a lot to me still.

It depicts a dark-skinned man in strange, almost Asian-Oriental-Ancient Biblical times dress - it's hard to even call it 'dress' since much of it is armour.  But the kind of armour that looks like it was made to fit his skin, as light as mithral and just as powerful.  His helmet is silver also, with that intricately worked design that reflects hours and days and even years of labour, and comes to a point at the top.  He holds a gigantic spear, the kind that is higher than his own head (and he's not a small man).  He is standing tall, at attention, with that faraway look in his eyes that goes just beyond you and misses nothing.  And the kind that, like the guards at Buckingham Palace, is unmoved by small distractions or foolish tourists or anything that is part of the usual day.  He manages to look calm, almost relaxed...and yet if you even flinched towards him with malice intent, he would whip that spear around and be pointing it in your face before you could even gasp.

And behind him is a door - a massive, blue-green, intricately carved door that stretches far, far above his head and beyond the edges of my picture.  It's the kind of door that proclaims a king, a kingdom, power, strength, and majesty you can't even imagine.  There is glory there, and beauty, and fear, and justice, and solemnity.  And it is before this door, this palace, that our strong and silent guard stands.  For he is a doorkeeper.

There are other roles he could have accepted, other tasks. He could be with a group of his fellow men and warriors who are fighting for the Kingdom in faraway lands.  He's in the shade of this great door, but he's also alone, and he is on duty morning and night.  You can tell by his eyes and the grip on his spear that he takes this position seriously - that he chose it, wanted it, perhaps even fought for the right to have it.  And he is proud to stand there.

When I saw that picture the first time, I thought of the great Bible verse, "I would rather be a doorkeeper in the house of my God than dwell in the tents of wickedness."  (Psalm 84.10)  I've always loved that verse, because you might think a doorkeeper a fairly boring, mundane task.  Something that you get stuck with while the other warriors and fighters are out doing the glorious work that gets accolades and medals and honour and praise.  But the man who wrote those lines - and the man in my picture - chose this task. It's a task of honour, glory, joy, and intensity.  It holds the promise of great things, because the doorkeeper stands at the door of greatness.  The King who resides inside has built a Kingdom that is worthy of being protected, a Kingdom so great you would rather stand in the scorching heat dressed in armour from head to toe, than go rest in the tents of your enemies, who have cool drinks and fans waving and maidens dancing and laughter flowing.  You scorn their luxuries, because you know that there's a day coming those things won't last.  They're laughing now, but the army is coming.  Your friends and brothers and neighbours and family are marching, and you're at the door watching, and the King is all glorious in the city waiting, and the great moment is coming...and so you would rather be this doorkeeper.

That's what I tasted - and that's who I saw - in my Assam tea today.